Other than the rough end to Week 13, it was a great week.  I’m looking forward to this week and the lower mileage.  I am also looking forward to the finishing my streak in just over a month!  I never thought I would make it this long, I just need to stay healthy and get through the next 6 weeks!

What a difference a day and some hydration makes.  I ran the same route along the water tonight as I did last night, the weather was near the same, but I was able to run much better.  Sometimes I forget how important hydration is when it comes to running.  I eased into the first mile and then negative split every mile after.  Today’s run was a confidence booster after last night!

Time got away from me today.  After work I had a meeting I needed to go to which started 30 minutes late.  By the time I got home I didn’t have 6 miles in my legs, plus I had an early day on Wednesday.  I did a loop around my neighborhood to keep the streak going!

This morning was an early morning followed by a long drive to a college fair I had to go to.  The first session was 4 hours, then a break, and an evening session of 2 hours.  My plan was to run in between the sessions.  I had packed extra clothes with me so I could shower after running.  At the first session I was talking with some of my colleagues I hadn’t seen in a while and they were planning to run during the break as well, though we were all running different distances.  The first session ended at 1300 hrs, which just happened to be when you could register for the SeaWheeze Half Marathon.  After some tense minutes of waiting, I was able to register!  I was really lucky to get in there were only 10,017 spots and the race sold out in 11 minutes.  I was really pumped and ready to run.  I found a gym where I could shower after running, I had to buy a day pass that was $15.  Pretty expensive for a shower but sometimes that is the cost of running

The sun was high and the humidity was just as high, it was a rough run considering how cool it had been in the evenings the last few days. 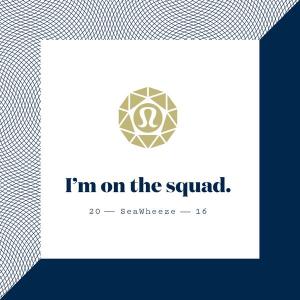 Today was a really early morning after not getting home till late, I only had about 5.5 hours of sleep and a long day ahead of me.  My day was pretty much standing in one spot for about 7 hours while I presented to students and another college fair.  My legs were really sore from standing in one spot all day.  I didn’t have the energy to do a tempo run and didn’t really feel like running at all.  I managed to eek out a slow mile but I wasn’t to happy.

I don’t say this often but I was happy for Friday to arrive, it had been a long week!  After another early morning and another 4 hours of standing my feet and my legs were pretty sore.  After work I helped a friend move some dance equipment to where she teaches on the other side of town.  When I finally got home I responded to some work emails and then took a nap for 2.5 hours.  I woke up, ran, ate dinner, had a glass of wine, and went back to sleep.  I was exhausted from the week.  My friend invited me out, but I was too tired to go, I felt bad but I knew I would be any fun.

After a solid nights rest I was feeling pretty good!  The weather was overcast and really foggy when I woke up.  I drove to the BWI Trail to meet FKBT and Sarah to run.  Even though it was overcast it was still humid.  Sarah was doing her long run, 22 miles, and I needed to do 12.  I planned to run one loop with her and then she would continue on.  FKBT was planning on meeting some friends to go on a long bike ride.  At the start of our run, another runner waved me down, we belong to the same running group on FB, and he recognized me.  It was nice to meet him, I’m always surprised by how awesome the run community is and you never know when you will actually meet someone you only know from social media!  As we went around the loop lots of other runners and bikers said ‘hi’ and one walker even shared some words of encouragement as we passed them.  People on the trail are much more friendly than most in Baltimore.  It was a nice loop to run around, differently scenery and some hills but nothing to big.  I think I slowed Sarah down a bit, I like to go a bit slower on my longer runs, we actually talked about that at the beginning and she said it would be good to test out her pacing.  After my 12 we stopped together briefly to take a runselfie and for Sarah to get some water and she was off on the loop again.  It was nice to get the run out early in the day.  My legs still were not fully recovered but I was happy to get the miles in!

After an hour of trying to get my new printer from work to scan I was ready for a run.  The air was cool and crisp perfect for running.  I decided to run at the Promenade along the water.  I was hoping to run 6 miles but once I got going I figured I would add some extra to make up for what I had missed earlier in the week.  I eased into the run with a slow mile and then what felt pretty easy turned out to be a 7:30 mile.  I was feeling pretty good and decided to try and stay around that pace.  Half way through my run I was surprised at how strong I was feeling.  The miles were just passing by.  I finished strong and really happy with this run considering how the week had gone.  Even though this was a low mileage week it was rough, standing in one place really took its toll on my legs and feet.  I am a bit nervous for the upcoming week and the 50+ miles I will need to do.  Oh today was day 330 of the running streak, 5 weeks to go!  4 weeks until the Baltimore Runinng Festival and 26.2! 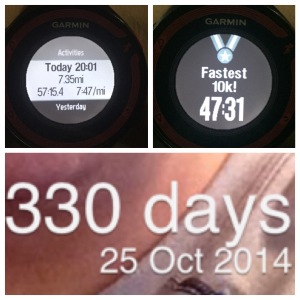 So for those who normally read my post for Thinking Out Loud know that I usually pick one topic and share my thoughts with you.  This week I’m changing it up!  I’ve been in a good mood all day and sometimes that gets me thinking about lots of different things.  Here it goes…

Many of you know I am a lululemon fanatic, it is all I wear (literally).  On Tuesday I saw a Facebook post that lululemon is hosting a half marathon in Vancouver, BC so I clicked the link and started to read about it.  It has actually been going on for a while, how did I not know about this before?  All the info I could find said the race which is allowing 10,017 registrants next year sells out very fast.  I set a reminder for 5 mins before registration opened on Wednesday.  I figured it I got in great, if not no big deal.  Well I got it and I’m super excited about it!!!  The rumor is that the race sold out in 4 mins!  Wow did I get lucky.  I was actually finishing a college fair for work and ran outside to get better reception on my cell phone, so I could register.  I can’t wait to run this race!  Did anyone else get in?  I’m looking forward to meeting lots of great people!

If you haven’t read my blog about the running community yet, I think it is pretty great and you should check it out!  This week I was reminded several times of how much runners have in common and just enjoy talking about running!  I went to an event on Saturday evening and almost as soon as I walked in a friend commented on my running and a person across the table chimed in she was a runner, we spent the next 45 mins talking about running.  On Wednesday I saw some colleagues I haven ‘t seen since spring and I mentioned I was running between the college fair sessions.  Next thing you know our conversation turned to running and one is running his first marathon in November and the other just PR’d in the 5k.  In between talking to students there wasn’t a dull moment sharing running stories and tips back and forth! 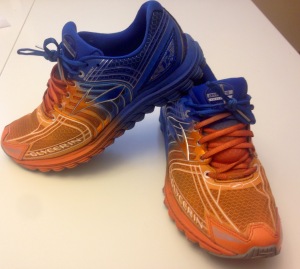 About 2 weeks ago the Red Cross called and asked me to donate platelets and almost right away asked when I could come in.  I’ve never done  that before, I’ve only donated whole blood.  So I had lots of questions about how it would affect my running.  They assured me it would be a quick recovery, so I agreed.  The donation (which I did last Wednesday) was really easy, the blood is taken from one arm, platelets are separated, and the blood goes back into the other arm.  The said I shouldn’t do anything strenuous for 12 hours after, but I could run in 2 hours at an easy pace.  I ran 60 mins later and felt just fine.  If you have the ability to donate platelets and the time (takes about 2.5 hrs) I would encourage you to do it!  The platelets are used to help people who have cancer, you are helping save a life.  If you can’t donate platelets donate blood!  If you can’t do either, donate something to someone or somewhere, it will probably make you feel good!

That was really random!  Chime in with your own random thoughts!