As week 12 ended I was feeling good especially after my PR in the Charles St. 12.  I was ready for the heavier mileage week that was in front of me!

My legs were feeling strong today, the lower miles in week 12 really helped out.  The heat and humidity are still lingering in Baltimore, but I would expect nothing different for Baltimore weather.  I decided to run around my neighborhood in the early evening.  As I was finished I saw my neighbors and after I cooled down I talked to them for a few minutes, not an overly exciting run, but I was happy with the pace.

My friend Kristen texted me in the morning and asked about my plans for running, when I told her, she wanted to run with me.  We waited till early evening when the sun was staring to go down before we ran.  We started at the Korean War Memorial went down Clinton street and made our way towards Patterson Park.  We looped both parts of the park twice and then made our way back to the waterfront.  We stopped once because my shoulder was cramping up, but once I massaged the pain away the last few miles of the run went well.  Just as we were finishing we ran into some of my friends I hadn’t seen in a while.  We stopped a spoke to them briefly and then finished up the last quarter mile.  I dropped Kristen off and decided I was going to get a burrito from Chipotle.  I went into the store and the music was so loud it could have been mistaken for a dance club.  I could barely hear the server when she was asking me what I wanted.  She made my burrito and I thought, what a waste she had put entirely to much rice, beans, veggies, and cheese on it.  If I had to guess I would say the burrito probably weighed close to 3 lbs.  I knew immediately I wasn’t going to eat the whole thing.  When I got home and bit into it, it had way to much cheese on it; it didn’t even taste that good.  I ate some of it just to get some food in my body but threw most of it away.  I don’t like to waste food but I didn’t think a burrito would be good reheated.  I should have taken a picture

After work today I had an appointment with the Red Cross to donate platelets.  I had never done it before and had lots of questions when they called and asked me donate.  My questions included how it would affect my training, how long it would take to recover, did it matter that I’m a vegetarian.  The person who called was very helpful in answering all my questions but out of caution I asked them all again when I went to my appointment.  They assured me it wouldn’t affect my training and recovery was actually faster than giving whole blood.  I asked if I would be able to run tonight, because they said no strenuous activities for 12 hours.  The phlebotomist told me I should be okay to run after 2 hours, but to carry extra fluids with me.  They were very nice, it takes a while to donate, it took me 2.5 hours.  They said it takes longer your first time.  While you are donating you get to watch a movie on your own personal dvd player.  I watched ‘Men of Honor’.  They also cover you with blankets because you get cold when you donate.  I started with one blanket, but during the donation process the machine started beeping the phlebotomist said it was because my veins were constricting because I was cold.  She felt my arm and said I was freezing, I didn’t even realize it and they but more blankets on me.  After I finished donating I had about an hour before I was suppose to go to a new run club, Holabird Sports Run Club.  I drank a lot of fluids and some extra orange juice and figured I would see how I felt.  The run club met at the Korean War Memorial and they had a rep from Under Armour there, it was funny I had actually met the rep at the Charles St. 12, she is friends with one of my running friends.  It was a great group of people, we started really slow, which was fine with me, but it was too slow after a mile, it was more than a 10 min pace.  I started to pull away a bit and another runner came up along side me, her name was Heather and we ran the rest of the way together and chatted a bit.  Afterwards we all met back up and talked for a bit before we called it a day.  Everyone had asked how I felt, I had told them before about my donation in case something happened, plus I had bandaids on my arms.  Surprisingly, donating didn’t effect my run at all.

When I got to Patterson Park to run hills, I realized I had forgot my Garmin.  I know the distances for the hills, but wouldn’t know the time.  I actually arranged to meet Heather who I met yesterday and run hills with her, she had a GPS watch but at the end of our run I forgot to ask our pace.  The training plan calls for 400m hill repeats but I figured 800 are better since Baltimore is hilly and we got in a longer distance.  I was hoping to do 6 repeats but I was tired after 4 and took a quick breather, Heather kept on going, she was pushing the pace.  As I ascended the hill I thought about doing one more but figured that 5 was good and I called it a day.

Friday’s are always marked as rest days but on a run streak a rest day doesn’t really exist, so I did the next closest thing.  I ran a slow mile around my neighborhood and then met up with some friends.

The plan was to get up early and run before the rain came, but I decided to sleep in.  I must have been really tired, I slept for 10hrs. I felt refreshed when I woke up but I did not feel like running.  The weather was dreary outside, in the 70s, but humid.  I couldn’t wait till later to run, my best friend was having a birthday party.  I delayed as long as I could and finally hit the road around noon.  I decided to run a different route instead of in the city.  I started from my house and ran towards Edgemere and the North Point Peninsula.  The terrain reminded me of the marathon course with the hills that I would be running.  My plan was to run the peninsula and then go to my parents and have them give me a ride home.  There were lots of straight aways on the run which made the miles seem longer.  Around mile 9 I reached North Point State Park, when I passed the Visitor Center I saw my Dad’s truck.  I wasn’t surprised my parents are always at the Park, my Dad is volunteer and Honorary Ranger and my Mom likes to take pictures along the trails.  I headed towards the fishing pier and noticed an event going on and quickly realized it was a wedding, then I saw my parents were in attendance.  I stopped and saw them, their friend’s daughter was getting married at the park.  The reception was just beginning I waved to my parent’s friend said bye and then continued my run.  At that point I figured I needed a new plan, since my parents were at the wedding and wouldn’t be able to give me a ride home.  I was close to the midway point of 20 so I decided to run back the same way I came.  Around mile 14 the skies opened up and it started pouring down rain.  I remember thinking about Sarah and her post about her 16 mile run earlier in the day and I wished I only had 2 miles to go.  It rained intermittently for the next 6 miles.  At mile 17 I stopped at a 7-11 because I had run out of water and if I didn’t get some I’m not sure I could have finished.  On this run I ate Clif Bloks more frequently, every 4-5 miles, and I think that helped.  I passed my house just before 20 miles and was so happy when my Garmin beeped.  I was pretty surprised at my pace, I was trying to go slow and get the miles in so I wasn’t shooting for any certain pace, but I thought I was going slower so I was pretty happy.

I felt surprisingly good when I woke up.  I made sure to stretch after the run yesterday and I think that really helped in my recovery.  I had lunch with some friends and then watched the Ravens game with them.  So close to a victory but we came up short.  It was about 2000 hrs when I started my run, the air was actually a bit chilly compared to what it had been.  It was in the low 70s and a light breeze was blowing.  I was hoping to get in 10 miles and I thought I could since my legs were feeling good.  A little over a half mile in I got sick while I was running.  I figured it wasn’t a big deal it has happened to me before, when I was in the military.  I just figured it was because I had a big lunch.  I kept on going but was feeling really sluggish in one sense but felt like I was running pretty hard in another.  At one point I thought my Garmin was off because it said I was running over a 9 min pace but it felt like it I was going faster with the amount of energy I was putting out.  I chalked it up to just loosening up the first mile.  Somewhere in the middle of mile 2 my pace had picked up but I knew 10 miles was not in the cards.  I wasn’t feeling well; my head was starting to hurt.  I started to think about it and I didn’t have as much fluid today as I normally do, and I should have been taking in extra after the long run.  By mile 3 I knew I was dehydrated and it was time to head back.  I didn’t want to run any further because I didn’t have my phone with me.  Even though my head was hurting I was trying to keep the pace, I figured it was good marathon simulation.  When I got back to my truck I felt totally depleted of energy, I was definitely dehydrated.  I went to Target and bought some Gatorade and chocolate milk.  I drank the chocolate milk on the way home, it did start to make me feel better almost immediately.  After I showered I mixed the Gatorade with water and drank about 40 oz, before bed.  I mixed 6 oz of Gatorade with 20 oz of water.  I think mixing it helps you digest it easier.  I finally started feeling better before bed and finishing up the blog.  Note to self, remember to properly hydrate!  Normally I carry a water bottle with me but forgot to today 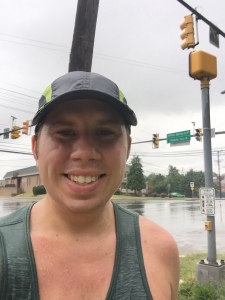