I call them quirks, maybe you call them something else; habits, superstitions, or ‘must dos’ before or during a run.  I’m not sure if all runners have quirks or things that must be the same all the time, but I know I have some.  So I thought I would share by thinking out loud and see if you share any of them or others of your own?

1.  Puting my shoes in the same place after running

This is a quirk I have developed in the last month or two.  I rotate between a used pair of shoes and a new pair of shoes to try and extend the life of my new ones.  I write the date I ‘retired’ the used shoes on the bottom now, but I didn’t always do that.  My quirk is that when I take my new shoes off, I must untie them, loosen the laces and sit them by the back door.  My used shoes must be placed at the exact opposite end of the kitchen.  I think I started doing this so I could remember which ones are which, before I started dating them on the bottom, then it just became something I have to do.

This one I have been doing since I was young.  One day I was watching an episode of Mr. Rodger’s and he was teaching kids how to put their shoes on.  He remarked he said he always started with his left foot.  Since that day I always put on my left sock and my left shoe first.  When I grabbed my socks I look at them at pick out which one is going on each foot, not that they are different just another quirk.

When I run in an area or loop I am familiar with I always run the same way.  I know advice from the experts is to switch it up so it doesn’t get boring but I like consistency.  Just last night while doing speed work, my friend asked if we should change the direction we were running on the track, I opted for no.

4.  When my shorts get tied

My shorts aren’t falling off before I tie them, no need to worry about that.  I tie my shorts right before I start running, I do this to keep any extra pressure off of my stomach.  I don’t tie them really tight but I like to make sure everything is snug and just the way I like it prior to and during the run.

5.  My watch latch must be in the same hole

This is annoying even to me and I don’t always get it right.  I don’t like my Garmin 220 to tight or to loose.  There is one hole that allows my Garmin to rotate freely, but not all the way around my wrist.  I can just give it a little twist and I can see the screen.  If it is to tight I feel like I am constricted, to loose and it feels like it will fall off.  I don’t always get it right and sometimes I have to make adjustments during the run.  I have thought about counting the holes or marking the right one… 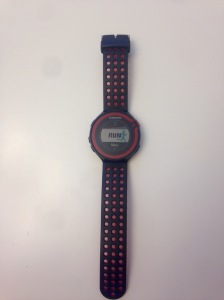 Prior to discovering Lululemon I ran in the same shorts for nearly 13 years.  Don’t worry I washed them and I had several pairs, they were my Air Force PT shorts.  When I transitioned to new running gear, some of that need to wear the same thing stayed with me.  On race day, I like to wear the same gear, weather permitting, for each race during the season.  No real reason behind it other than I know I’m comfortable racing in that gear and that helps to ease my mind; one less thing to worry about.

Maybe this isn’t a quirk, but I’m including it anyway it is something I do.  I don’t know why I picked the time frame I did, I don’t think there is any science behind it.  For a 5k race, I won’t have any alcohol a day or two before the race.  For a half marathon, I won’t have any alcohol 2 weeks prior.  Finally for a marathon, no alcohol for a month prior.  Not that I drink a lot, but I want to make sure my body is in the best shape it can be for race day.  I like to think of the body as a machine and you have to give it the proper fuel!

I’m thinking this one might be the most common shared by runners or I could be totally wrong.  I have to make sure my laces aren’t to tight and not to loose.  That’s not the quirk.  The quirk is when I retie one shoe I have to retie the other to make sure the pressure is the same.  Just the other day I was out on a run and within a 1/4 mile I probably retied my shoes 4 times.  There was a rock in one I couldn’t get out, finally I found it in my sock.  Having the lace pressure correct and even is a must.

This is another quirk that harkens back to my military days.  ‘If you’re not early you’re late!’  I have to be everywhere early, I think this annoys some of my friends.  It is a habit (quirk) I can’t break.  Normally I am 15 minutes early to everything, come race day I like to be 30 minutes early or even more.  I want to make sure I have time to get comfortable, take any last minute fluids, get rid of any last minute fluids.  I’ve had the experience of being the last person to cross the start line and had to jump over the deflating arch.  I was in the Bahamas for the marathon and in the porta-potty when the race started.  Always being early is a must for me, if I’m not my nerves start to get jittery and that is not good before a race.

I think that is all of my quirks, hopefully you don’t think I’m crazy or have OCD, cause I don’t!  Wait isn’t that something a crazy or OCD person would say…no of course not!  Anyway…

What are your running quirks?